“It was so lovely to have Leigh play the Harp for our wedding ceremony. We chose many Italian inspired ballads, which really made our ceremony feel special, such as it was straight out of a fairytale.”~Ana Homes

Hire Leigh Brown to play lovely music at your next Portland, OR event

Hire Leigh Brown to play lovely music at your next Portland, OR event Make your wedding distinctive with music that is special and means something to you. With lead time, Leigh can perform your requests. Add an extra touch of class to your next grand opening, holiday party, art show, or other special event with live harp music.

Leigh Brown is a professional harpist who has performed as a soloist and in ensembles and orchestras in Oregon, Indiana, Maryland, Washington, D.C., and the World Harp Congress in Prague. Born in Indiana, she began her musical training on piano at the age of six and on harp at age eight. She continued her music education while still in high school at the world-renowned School of Music (now Jacobs School of Music) at Indiana University. As an undergraduate, she received a scholarship to study with Distinguished Professor of Harp Susann McDonald in the largest harp department in the world. She graduated in 2001 with a degree in harp performance and was awarded the special distinction of a Performer’s Certificate. At IU Leigh performed with various orchestras, harp ensembles and chamber groups and in the ballet and opera series. During her last year of college, she won the Career Award in Music from the National Society of Arts and Letters Competition, Bloomington Chapter.

Leigh performs classical to contemporary to pop and jazz for all types of events in the Portland area. She is also learning to play the drums! She loves wine and has her own wine brand called Lolati Wines and resides in Oregon wine country with her husband and three border collies. 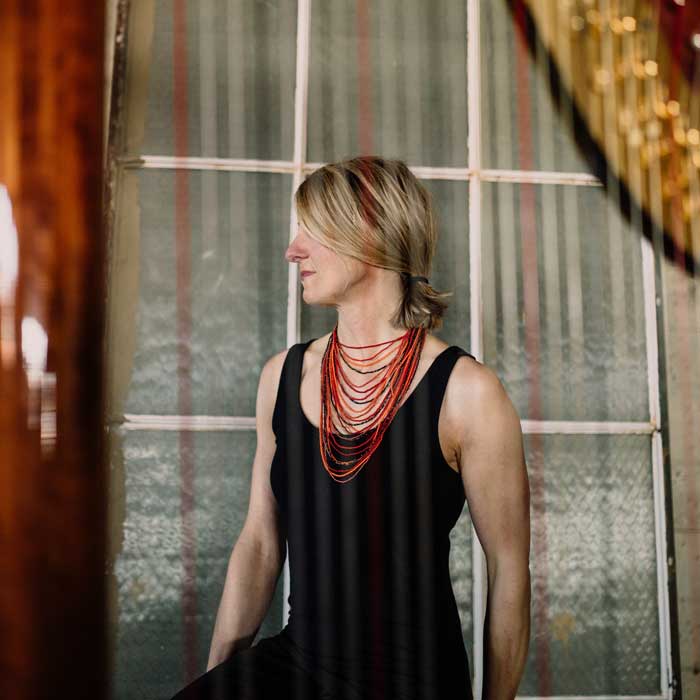 Leigh can play a wide variety of musical genres including jazz, classical, and pop.

You made it a truly magical event and we are very grateful!

“Thank you for sharing your amazing artistry with us and all of our guests at our wedding Friday evening. You made it a truly magical event and we are very grateful!” – James Bull, Groom

Thank you so much for being a part of our grand opening!

“Thank you so much for being a part of our grand opening!  Your music was so lovely and just what we needed to make the event perfect.” – Laurel Clark, Owner of Fern & Fae Spa

“I seriously can’t thank you enough for being a part of the special day. I’m not one of those people who has had my proposal or wedding planned since I was a kid, but I’ve always known I wanted a harpist there—you literally made my dream come true! The music was so lovely, and you coincidentally played several of my favorite pieces of music (“Moon River”, “And I Love Her”). I think my friend Greg put it best when he said “it felt like I was in a movie” after you left!” – Barton Robison (I played the harp while he proposed to his boyfriend!)

“Thank you for your kind, patient and responsive character. I’m so glad you were able to provide music for my daughter’s wedding. My soul and mother of the bride nerves were soothed from your music!- Paige Ponder, Hospitality Lead at Beacon Hill Winery” – Patty Sherve, mother of the bride

“Your music helped suspend reality, and made me feel like I was floating in a dream towards the love of my life.  Thank you for being there for us on our special day and knocking it out of the ballpark!” – Ege Yalcinbas, Bride

Thank you so much for playing at our wedding!

“Thank you so much for playing at our wedding! The music was absolutely perfect. Our guests were so impressed with you (especially my dad!). The music made all the difference. It was the best day of our lives! Thank you for being there to be part of it.” – Hayley & Gabby, brides

Such a fun and elegant flair

“Recently had Leigh play for our tasting room, which brought such a fun and elegant flair to our afternoon. I am humbled to know her personally and can attest to how amazing Leigh is as a person and musician. The eclectic genre of music she plays also shows you how talented she is with her craft. All of us at Beacon Hill Winery are thrilled to have Leigh come back and play for our venue.” – Paige Ponder, Hospitality Lead at Beacon Hill Winery

“We are SO HAPPY to have found Leigh! She played the most beautiful music for our guests arriving, played the music for my groom walking down, our bridal party and me walking down the aisle. Everyone LOVED that we had a harpist and told us just how beautiful her music was. Thank you Leigh for sticking with us through THREE postponements (take that COVID19, We still made 2020 our year!!) If you are looking for the BEST HARPIST, do yourself a huge favor and hire Leigh. You will NOT regret it! She is AWESOME! :)” ~Jessica Silebi, Bride

Your work was amazing!

“Thank you for making our ceremony so special!  Your work was amazing!  You made our dreams of having a harp at our wedding come true.  We appreciate you!” ~Alexis & Karen Guzman

“Leigh, thank you so much for your services! You were amazing! You were very professional and easy to work with and worked with our requests. Thank you for making my wedding very elegant and something that my guests will remember. I will definitely be hiring you again for any event where I need some elegance. Your prices were reasonable and you were able to fit us in on such short notice. You are the best!” ~Saydi Calderon, Bride

Wonderful musician and easy to work with

“Leigh was very responsive to all of our questions concerning her performance. She made wonderful suggestions for songs – and was even willing to learn a new song that my daughter was considering. She was timely and able to assemble all of her own equipment at the venue. Trustworthy, great skills and an easy going attitude to our needs for the wedding is how I would describe Leigh.” ~Kim Jenkins

Her music was beautiful

“We hired Leigh to perform at our wedding ceremony. She was great! She was very communicative and thoughtful throughout the planning stages, and on the day of, she was punctual, easy to work with, and her music was beautiful. We couldn’t be happier and we highly recommend Leigh.” ~Chris Sweeney, Groom

she adds beauty and elegance to the whole affair

“We have worked with Leigh several times, each time she has an amazing performance, and is an absolute pleasure to work with. Our Members love hearing her perform at our events, and she adds beauty and elegance to the whole affair. Cannot wait to have her back again!!” – Layne Quinn- Membership Manager, Revana Estate Vineyard | Alexana Winery | Bodega Corazon del Sol

I heard so many raving comments

“It was such a pleasure having Leigh here for First Thursday. I heard so many raving comments from guests and staff alike!” ~ Nicole Elkins, Sales Manager of Hampton Inn & Suites by Hilton-Pearl District

Thank you so much, Leigh

“Thank you so much, Leigh, for being a part of our special day. Thank you for continually working with us and helping us create personalized touches, an amazing day, and truly unforgettable memories. Our love and gratitude.” – Ruby Manzo, bride

“It was so incredible having you at the event yesterday – thank you again for sharing your talent! I will be sure to recommend you to upcoming groups.” – Jane Schonhaut, Group Sales Manager of The Porter Hotel

“We hired Leigh to play the harp during our ceremony and it was absolutely magical. She is very professional and helped us pick out our songs. She was very open to learning new songs. She also takes care of all of the unloading and loading of her equipment, so there is no stress or hassle. Leigh is wonderful and everyone should hire her to play at their wedding. Amazing!” – Samantha Mathers, Bride

Let’s Get in Touch